My first steps on the ice 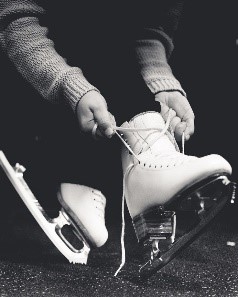 Where my journey began

“I want to do that,” were the words I uttered whilst standing underneath the kitchen table, aged 3. Watching Torvill and Dean compete in the World Professional Championships, they were my words. “I want to start learning to ice skate.” My desire of learning to ice skate began to burn, here’s my story about my first steps on the ice right from the start from my first steps on the ice.

I was the tender age of 3 and sat watching the most incredible ice skaters ever to have graced our Great British television screens at the time. The wonderful, graceful  Jane Torvill and Christopher Dean. Their movement across the ice can only be describe as flying across the glistening beauty of frozen water! How could someone, anyone, glide so effortlessly on around 4mm of steel and make it look so easy? Well, I was about to find out!

My first steps on the ice

My first steps on the ice were at Altrincham Ice Rink where apparently I took to skating ‘like a duck to water!’ Harry Hatton, my first coach, held my hand as I place one foot in front of the other, stepping slowly at first then gradually gliding on two feet, then one and….I was off! There was no stopping me! I remember it feeling easy and how I wanted to return everyday. After several months, of learning some of the basics, I moved to Joan Slater (MBE), Joan was ‘one of the best’ coaches at Altrincham Ice Rink. An incredibly respected ice skating coach, Joan took pupils on ‘by appointment only’ and generally didn’t teach beginners. Her pupils at the time were Paul Askham and Sharon Jones, her son, Nicky Slater who skated with Karen Barber had also trained at Altrincham ice rink.

WOW, I was now her pupil. Luck, maybe it luck struck, but I looking back now and see everything happens for a reason.

In life, certain people are blessings and some are lessons, Joan was both. She taught me not just the basics of skating, but also confidence, self-esteem, focus – razor sharp focus, determination, ambition and pride. Most of all when I look back, she taught me from the beginning to be thankful and that became my gratitude of today.

Once the foundations of skating were learned and set, I was ready to compete. I fell in my first competition, but hey, I was learning. I then went onto win the ‘Blades shield’, and this was just the start! Competitions created excitement. Every season of competing that went by usually meant a new dress, new sequins and more sparkles. The best bit was that I got to chose the colours and I loved it! Well not the pins that would catch me as I tried the dresses on at my mum’s beck and call. But that was part and parcel of being fortunate to have a mum who could sew. My dresses fitted like a glove, sometimes even tighter, completely made to measure and 100 percent designed for me.

From the beginning of learning my first steps on the ice to the first competition, I found myself falling in love with what I feel is one of the most beautiful sports around.